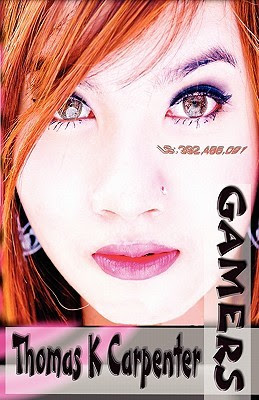 Fair warning: this is a book review, where I will talk about the book.  That means you may find some of this could be classified as a “spoiler”.  Proceed at your own risk.

There are annoying “Mario-is-God” references.  Most of these are pulled from the end of the book because this is when it started to really drive me nuts.

Other strange slang -
Debuff - "Let's not debuff ourselves with mistrust."
Frags- "It seems certain elements outside of our society, called the Frags - thier name, not ours - have been lurking around our personal files."
Twinked - "Hey Z, your outfit looks totally twinked."
And a whole mess, "Bydaway, your outfit is pretty fragadelic, too.

Also there were a few scattered grammar errors where he would mess up something like a gender and you really couldn’t figure out what was going on unless you realized this.

Things just didn’t feel real enough.  The world felt like pieces of a brainstorm wedged in here and there and the characters were a bit weak.   So what am I talking about?

For a quick example:
Life is a game, everything is made into a game and the best gamers get good jobs...
Other than programming the world and games NO JOBS ARE EXPLAINED.  What else is out there?  How does her dad play games for work at home?  Random piece of brainstorm wedged in.

Here is an example of setting issues, this is probably not the best choice BUT this is the scene for the ENTIRE chapter.

“Their one story ranch normally felt like a grand palace, ten times larger than the space it actually occupied.  Walls, covered in fantastic landscapes, turned the rooms into wide living spaces.Her mother constantly changed the scenes so one day Gabby might walk into a castle entryway, and the next it would be a room on the moon.Today the living room was nothing more than the shell of its normal, unaugmented self, only modified enough to cover the dust on the cabinets.  Her parents sat on the couch and a chair had been strategically placed in the center of the room.”


First of all, you just have to run on faith and a complete misunderstanding for how the place can be larger than it is...I don’t understand how they can walk through walls to make it bigger...or if it’s an illusion and appears bigger, but then I don’t understand really how that works either...regardless.  All I can think of is Harry Potter - skip ahead if you’ve never read it...- in the fourth book they go camping and MAGICALLY expand the tent.  Yeah, I don’t understand magic but it’s supposed to be magical.  How the author expects us to believe in this strange magical property of technology with no explanation is beyond me.

So, like I said, it seems like pieces of a brainstorm just shoved onto a page.  Like the author thought, “Hey, wouldn’t it be super neat-o to have like projections on the walls that make the house super awesome!”  I don’t know why he sounds like a 50’s nerd...

BUT the ENTIRE scene takes place here and what do you have?
1. One story ranch
2. Unaugmented...not very descriptive.  Simplest question, what color is the room? Does it have plain white walls or a green screen to project the image??
3.  There are cabinets, a couch, and a chair (strategically placed).

Like I said this isn’t the best example in the book but for the rest of the chapter all I can picture is the big empty space in the Matrix.  With a couch instead of a TV.

As for the characters...well I’ve already bored you enough with the worldbuilding issues, let’s just say that they have little depth and forced growth.  They just don’t feel realistic enough.
Oh and random FYI: "Prisoner's Dilemma" changes a bit when you throw in groups...not quite an accurate portrayal.

Overall it was enjoyable enough but not the best choice out there for this genre.


Check it out on Amazon.